History of the Diocese

Pope Gregory XVI established the first Diocese in the State of Indiana at Vincennes in 1834, and the entire state plus the eastern third of Illinois were under its jurisdiction. In 1857 the northern half of the state became the Diocese of Fort Wayne. After 1878 the bishop of Vincennes lived in Indianapolis and in 1898 the diocesan name was changed to Diocese of Indianapolis.

The Diocese of Evansville, having an area of 5,010 square miles and comprising twelve counties in the southwestern section of Indiana, was created by Pope Pius XII on November 11, 1944. The episcopal residence is in the city of Evansville.

The present Diocese of Evansville has 45 parishes divided into 4 deaneries with a Catholic population of 79,500.

Cathedrals of the Diocese

St. Francis Xavier Church occupies land that was granted to the Catholic church by the King of France. The first parish records date from 1749. The present building shown at left was begun by Rev. J.L. Champomier in 1826 and completed by Bishop de la Hailandiere in 1839. St. Francis Xavier Church became the first cathedral church in the state when Pope Gregory XVI established Vincennes as the first diocese in Indiana in 1834. The first four bishops of Vincennes (Brutè, de la Hailandière, Bazin, and De St. Palais) are buried in the crypt below the church. In 1898, the See City was moved to Indianapolis and the diocese became the Diocese of Indianapolis. The church was elevated to the level of Minor Basilica in 1970. 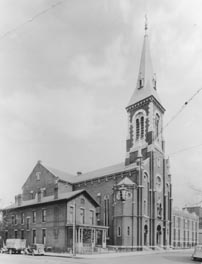 Assumption Church was founded in Evansville in 1837 by Father Anthony Deydier. It was the first Catholic church in Evansville and the fourth parish established in present diocesan boundaries. The first church was located at Second and Sycamore Streets. In 1871, that building was sold and a new church, shown at left, was built on Seventh Street. In 1944, Pope Pius XII created the Diocese of Evansville with the See City in Evansville. The first bishop, Henry J. Grimmelsman, dedicated Assumption Church as the Cathedral Church for the new diocese. In 1965 the property was sold to the city of Evansville for their new Civic Center Complex.

Holy Trinity Parish was established in 1849 by Father Francis Kutassy and was the second Catholic church in the city of Evansville. In 1950 lightning struck the church and it burned to the ground. The present building, shown at left, was completed in 1957. It served the diocese as the Pro-Cathedral from 1965, when Assumption was torn down, until 1999. Holy Trinity Parish merged with Sts. Mary & John Parish in 2015, and the church building was named an oratory. In 2017, the oratory was relegated to profane but not sordid use, and all remaining pastoral activities were transferred to St. Mary Church. 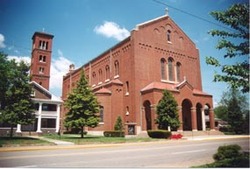 St. Benedict Church was established in 1912 and the first church building was completed in 1914. The new parish was placed under the care of the Benedictine Monks from St. Meinrad by Bishop Chartrand. The present building, shown at left, was completed in 1928. Both Bishop Francis Shea and Bishop Gerald Gettelfinger were ordained and installed here. On April 11, 1999, Bishop Gettelfinger dedicated St. Benedict Church as the Cathedral Church of the Diocese of Evansville.